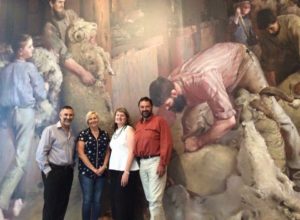 Australian Council of Agricultural Journalists president Genevieve McAulay will steer the ACAJ for the fourth year after she retained the role at the council’s AGM last week.

Pete Lewis was also re-elected vice president, Gordon Collie stays as treasurer and Leigh Radford will continue on as the international delegate. Laureta Wallace stepped down as secretary and was replaced by Rebecca Jennings.

The ACAJ’s state representatives are:

Ms McAulay said it was an enormous privilege to be re-elected for the fourth year as president.

“I would like to thank Laureta Wallace who steps down as secretary after two years she has done an amazing job and we are pleased she will continue as the National Rural Press Club representative,” she said. “At the same time I am pleased to welcome Rebecca Jennings to the role. Rebecca is already a familiar face on the ACAJ – she held the position of Victorian Rural Press Club representative last year and managed the development of our new website. As past recipient of the IFAJ-Alltech Young Leader in Agricultural Journalism Award it is great to be able to have someone of Rebecca’s calibre take an executive role on the committee.”

She said the ACAJ, as the umbrella group for the nation’s Rural Press clubs, has a lot to be proud of, especially on the international stage, where Australian rural journalists and photographers scoop the pools year after year in the International Federation of Agricultural Journalists (IFAJ) annual awards.

“As a committee we have achieved a lot in the past three years with our IFAJ pre- congress tour to Far North Queensland in 2015 where we hosted 52 international journalists.

“We are also very proud to have played a small part in setting the foundation for the launch of the National Rural Press Club and we congratulate Colin Bettles and his team for driving forward.”

Looking ahead, Genevieve said the ACAJ executive is excited to be bidding to host the 2021 IFAJ Congress in Australia.

“If successful I believe this will be a great shot in the arm for Australia rural journalism and will give us a unique opportunity to showcase more of Australian agriculture to the rest of the world.” 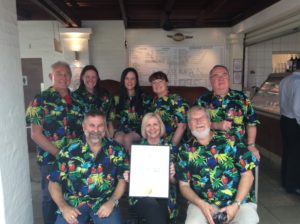 The ACAJ hosted a pre-congress tour through far north Queensland, ahead of the 2016 IFAJ Congress in New Zealand.

It gives me great pleasure to present my third Presidents report for the financial year of 2016/2017 on behalf of the Australian Council of Agricultural Journalists.

The ACAJ has packed a lot into the last three years with IFAJ pre –congress tour, our first face to face meeting in Canberra and our desire to get a National Rural Press Club up and running.  This year we hit the ground running with an early IFAJ congress that saw us forced to bring forward out awards to the start of the year.

It is great to see despite the early deadline the ACAJ Awards continue to grow with strong entries across all State Clubs. Our winners this year:

Once again Australian journalism was a force to be reckoned with on the international stage with Landline’s Marty McCarthy winning the IFAJ Star Prize for Excellence in TV Broadcasting. Another Queensland entrant, Wide Bay ABC rural reporter Kallee Buchanan won the Digital Award.  Scooping the pools for photography was The Stock Journal’s Jacqui Bateman (South Australia) who won both the IFAJ’s people category and the overall Best Rural Photograph with her humorous take on PETA’s naked models campaign.

Cassandra Steeth was runner up in the audio category. Cassandra attended the IFAJ Congress as the Rabobank recipient and Collin Bettles gave up his spot on the congress for Sally Cripps, Queensland Country Life.

A big thank you to our awards co-ordinators this year – Peter Lewis who looked after the Broadcast Awards and secreary Laureta Wallace for her work in co-ordinating the print awards. As always we are ever grateful to our long serving photography co-ordinator, Gordon Collie.

There was a sense of urgency with the awards this year with the congress being held in Pretoria, South Africa in early April, but I am pleased to report that despite the time frame a large contingent of Australian delegates attended congress. The good news is that next year’s congress in the Netherlands will not be held until early July, allowing us more time to take on new sponsors and to promote and judge our awards.

In February 2016, the ACAJ held its first face-to-face committee meeting in Canberra, together with a meet and greet cocktail party at the National Press Club. The event had a couple goals – to bring us closer as an organisation; to explore the opportunity of establishing a rural press club in ACT and to create an awareness about who the ACAJ is in the nation’s capital.

Following this Peter, Gordon, Leigh, Laureta and I assisted in establishing a working group to look at the possibility of a National Rural Press Club.

It is great to be able to report that in February this year Laureta and I attended the launch of the ACT National Rural Press Club.  While it is early days the club has elected Colin Bettles as its chairman and has a committee that is made up of representatives from key industry bodies and also has managed to secure some strong sponsors including Westpac and Graingrowers.

The launch was very well attended by politicians on both sides of politics as well as key Canberra journalists.  I want to say thank you to everyone on the ACAJ committee who supported this initiative and congratulations to Colin and his team we look forward to working with this new club.

We have made a bid for 2021 IFAJ Congress, which Leigh delivered to the IFAJ. Pete Lewis will be the chair of the Congress and has put together a strong case which will involve taking the congress delegates to Uluru, then on to the Ghan and finishing in Darwin.  A pre- and post-congress tour will also be included – the Rural Media Club of South Australia is keen to participate and have suggested a pre tour around Adelaide. We don’t expect to hear anything until later this year, but given the success of our pre-tour in 2015 we believe we are in with a good shot.

In my report last year the ACAJ twitter account had about 470 followers, today I am pleased to say this now sits at 527.  Pete, Bec and I tweet under ACAJ and I would encourage other committee members to do the same if they are at events it just helps to build our profile.   The ACAJ also have a Facebook page which is managed by Pete, we currently have 43 members and would love more.

Our new website offers a very professional look and I think the on line application for all the awards is a great initiative.  We are still struggling to get the clubs to add their events to the calendar.  It is an issue that the incoming committee needs to find a solution for.

While the ACAJ is not in the practice of inducting life members, Pete and I did manage to present the boys from the Betoota Advocate, Editor Clancy Overell and Editor at Large Errol Parker with ‘Honorary Life Membership at Rural Press Club Qld event in March.  In recognition of their tongue in cheek contribution to rural regional and remote journalism. This was accepted with the usual gusto by the boys.

This last year has seen the culmination of our efforts come to fruition and our membership base increase with the inclusion of the National Rural Press Club.

I think the time is now right for us to look at getting together face to face again with an event to coincide with the National Rural Press Club and would recommend that the incoming committee put that on the agenda.

I would also recommend for the incoming committee a program by which we look at restricting the running of the awards with a co-ordinator and a support for each award.  These ensure workloads are shared and that we a succession plan.  It also means that everyone on this committee has a role and feels part of the process.  The other recommendation will be a two subcommittees – one for fundraising and sponsorship and the other for events, media and marketing.

Going forward now I think it is vital that the ACAJ build on what it has achieved to date and lock in key sponsors and finding any available funding for not for profit organisations that may fit our criteria. Lack of funds is our biggest hurdle going forward.

I would also like to recognise and thank the 2016/2107 ACAJ committee, particularly vice president Peter Lewis, secretary Laureta Wallace, treasurer Gordon Collie and international officer Leigh Radford for their ongoing work and for sharing the same vision to grow the ACAJ footprint. In addition I would like to thank Bec Jennings who has stayed on in a support role and who has been on hand to assist with a number of web updates and media releases in very short notice.  I also wish to thank and recognise our state representatives who play a vital role as the link between state clubs and the ACAJ.

Our secretary Laureta has informed me that she does not intend to seek re-election as secretary due to her professional and personal commitments.  Laureta has been the linchpin in helping us drive our push into Canberra with her connections and knowledge of the workings of the inner circle of this niche market.  I have valued her experience, drive and professionalism and want to thank her for all her efforts, as we all know it is always a challenge to find a balance between your daily commitments and time for organisations like the ACAJ.  The good news is Laureta will stay on the committee as the National Rural Press Club representative.