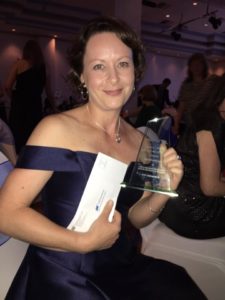 Caroline’s investigative nine-minute story, “Does Zambia have what it takes to become the food bowl of Africa” gained the award ahead of stories submitted by radio journalists from all sectors of the media industry.

According to President of Rural Media SA, Ian Doyle it was a genuine reflection of the quality and depth of rural journalists that Caroline Winter’s rural themed radio story produced by a rural journalist, stood out from all other quality mainstream competition.

Her ‘Exposure-4-Development’ media tour offered the opportunity for rural journalists to have a first-hand look at farm issues in the developing world, looking beyond the images of hunger and poverty and exploring a range of initiatives and opportunities.

According to Caroline Winter, Zambia claims it has all the ingredients to be the food bowl of Africa, but how does it turn that dream into reality?

“It offers large expanses of arable land and an abundance of water, but bringing farming into the 21st century and dealing with poverty remain massive hurdles.”

“So the nation is selling itself as a peaceful and democratic place to do business and is throwing its doors wide open to foreign investors.”

An online overview of “Does Zambia have what it takes to become the food bowl of Africa” and link to Caroline Winter’s radio story can be found here.