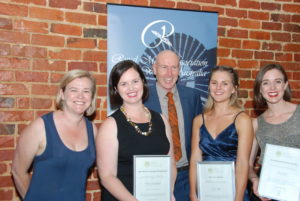 A new wave of rural and regional journalists has taken the 2017 RMA WA Awards by storm with young entrants taking out a third of prize categories .

ABC South West’s Tyne Logan, 23, originally from Denmark, was crowned best new entrant for her portfolio of multi-platform works that judges described as “amazingly versatile” for a young reporter who entered the profession only three years ago

In print Farm Weekly’s Stephanie Sinclair, 26, took out the best news coverage category with her story Mulesing debate, which provided a comprehensive and well-crafted insight into the complex and contentious sheep farming practice.

Hailing from New Norcia, Sinclair has only been working in print media for nine months

Pilbara News journalist Tom Zaunmayr’s photo of former Pilbara MP Brendon Grylls losing his seat at the March State election earned him the best photograph award. The 26-year-old is in his fourth year at the Karratha-based newspaper, which he joined straight out of university.

Judge and senior lecturer in journalism Dr Kayt Davies said the judging panel was impressed by the standard and scope of entries, which numbered more than 50 this year.

“Whether stories were targeting specific communities, specific sectors or the entire state, journalists demonstrated very clearly they were focussed on servicing the needs of their audiences,” she said.

The top gong – excellence in rural media – went to ABC Rural for its series of stories investigating pressing energy issues faced in rural and regional Australia.

Other winners included ABC Mid West’s Joanna Prendergast in the best broadcast category for her story Dry season crisis for farming family, CBH in the best communications campaign for its Regional Mental Health series and freelancer Nathan Dyer for his feature Prime Time, which was published in RM Williams Outback magazine.

Student journalist Marley Amphlett took out the inaugural best student category for her suite of works that covered a range of regional issues including liquor bans, SIDS and a feature on Newman.

“The rural media landscape is tough but robust and plays a very important role telling the stories of our regional and agricultural communities,” he said.

“These awards give industry the opportunity to showcase those stories and recognise the amazing tact, technique and skill journalists apply when plying their trade. It is especially encouraging to see so many young journos rewarded for the hard work they put into their storytelling.”