Bettles won the top gong for Rural Writing for his forensic analysis of the powerplays behind Labor’s decision to shutdown the live cattle industry in 2011. Click here to read the article.

Steeth produced a gritty documentary for Radio National’s ‘Off Track’ programme on the conflicting emotions facing farmers with a feral animal problem to win the Rabobank Award for Excellence in Rural Broadcasting. Click here to listen.

As part of their prize, Bettles and Steeth will travel to South Africa and represent Australia at the International Federation of Agricultural Journalists’ (IFAJ) Awards in April.

ACAJ President Gen McAulay congratulated both winners and said their standout entries again underscored the strength of rural and regional journalism in Australia.

“Colin Bettles’ story demonstrated a dogged fact-finding investigation so rarely seen due to the relentless demands of a 24-hour news cycle,” she said.

“And in “Reluctant Hunters” Cassandra Steeth delivered a fresh and particularly personal insight into the turmoil facing farmers trying to control feral animals on their properties with lethal force.”

This year’s ACAJ television winner was ABC Rural Reporter Marty McCarthy for his Landline story last October on the family whose North Queensland banana plantation was quarantined over an outbreak of an exotic plant disease. To view the story, click here.

“They spoke with surprising candour and frankness, which helped underscore the complex challenges facing authorities working to contain exotic plant disease outbreaks in one of Australia’s biggest and most valuable agricultural industries.” Ms McAulay said.

The ACAJ’s Online award went to ABC Rural Reporters Kallee Buchanan and Ross Kay who teamed up in December to give readers an insight into the secret, fleeting sex life of tropical dragon fruit in Queensland. Click here to read the story.

“This was an imaginative and effective use of digital technology,” Ms McAulay said. 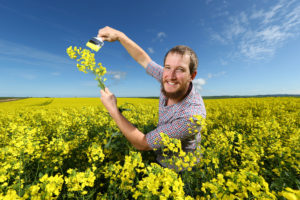 The Adelaide Advertiser’s Tait Schmaal again took out the premier photographic award with his clever image of a golden field of South Australian canola being touched up with a dab of yellow paint (above). 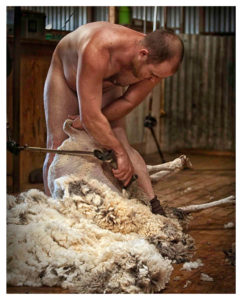 The South Australian Stock Journal’s Jacqui Bateman won the “people” category with her humorous take on PETA’s naked models campaign (above) and the Townsville Bulletin’s Scott Radford-Chisholm took out the nature/landscape section with a line of lambs at Eldorado Station (below).

Their winning entries will also represent Australia at the International Federation of Agricultural Journalists (IFAJ) Awards in South Africa in April.

“This in turn reflects the great breadth of issues that impact on , and interest rural Australia ,  and they are a testament to the important role rural journalism serves communicating not only with people in the country but connecting the “bush” to those in the city,” Mr Charteris said.