The Australian Council of Agricultural Journalists (ACAJ) has paid tribute to one of rural journalisms greats – Leigh Radford – who today finishes his career after 30 years with the ABC Rural.

While steering the ABC’s rural broadcasting division Leigh was also an active member of the ACAJ, currently holding the position as international delegate.

President, ACAJ, Gen McAulay said they were shocked to hear of Leigh’s sudden departure this week.

Leigh started with the ABC as a trainee rural reporter in 1988, moving up through the ranks to become National Editor (Rural) in 2005, leading the specialist genre for the ABC.  Leigh was the obvious choice as Head of Rural and National Programs under ABC Regional almost two years ago.

Vice President of ACAJ Peter Lewis a former ABC journalist and long-time friend and colleague of Leigh’s paid this tribute: 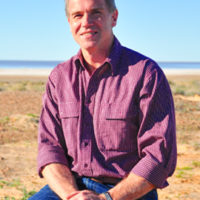 Leigh Radford started with the ABC as a trainee rural reporter and Peter Weir started work on one of his finest films “Dead Poets Society” with Robin Williams as eccentric English teacher John Keating.

Like Keating, Leigh showed an uncanny knack for bringing the best out of those he worked with, and by 2005 those who worked for him, as the public broadcaster’s National Rural Editor – or simply “Captain Rural”.

He shepherded his team through the character-building transition from radio broadcasting to digital publishing with a firm yet easy-going attention – not only to the new technology, but the mind-set and skills needed to meet the demands of new mobile media platforms.

Leigh never lost sight of the big picture either.

The ABC this week acknowledged the breadth of his contribution and the high regard with which he is held throughout rural, regional and remote communities and agricultural industries.

But let him go anyway.

Maybe those folks, and the legion of ABC rural broadcasters he mentored and befriended over the years, should climb up on their desks like they did in “Dead Poets Society” and give him the send-off he deserves “…. O Captain My Captain”.