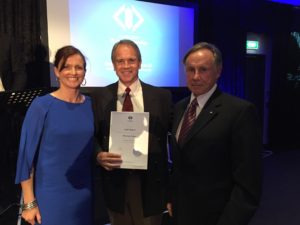 ACAJ’s international delegate, Leigh Radford, has been made an Honorary Fellow of the Australian Rural Leadership Foundation.

This was a unanimous decision by the Foundation board, in recognition of exceptional service and commitment to rural and regional Australia.

As Head of ABC Rural and National Programs, Leigh has been a passionate advocate and champion of the people, places and issues of rural Australia. During that time Leigh has also enjoyed a long association with the Australia Rural Leadership Foundation.

Leigh said he was humbled to have been bestowed such an honour.
“The values and objectives of the Foundation have always resonated with me and I have always felt it a privilege to have had this involvement over my career,” he said.

“Their network is expansive from Senators, to CEOs, industry and government leaders. So imagine my surprise when the ARLF bestowed this honorary fellowship.”

Genevieve McAulay, president of the ACAJ congratulated Leigh on the fellowship.

“I cannot think of anyone more worthy than Leigh, even in his role with ACAJ as our international delegate he continues to champion both agriculture and rural journalism both nationally and on an international level. The ACAJ is lucky to have someone of Leigh’s calibre on our committee.”