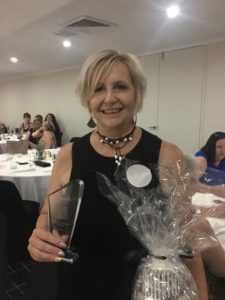 She won the Leadership category of the 2017  QRRRWN Strong Women Leadership Awards in recognition of her role in promoting rural journalism.

“I am both honoured and humbled to have been bestowed the Leadership Award by the QRRRWN Strong Women Leadership awards for my work as former President of the Rural Press Cub Queensland and current president of ACAJ,” Genevieve said.

“However, I have not done this alone – I have had the privilege to be part of dynamic committees that helped ignite debate and bring the issues of agriculture to the forefront.

“At the ACAJ I am flanked by a committee of people who share my passion for agriculture and value relationships.  They too, are all leaders in their field and like me have chosen to give back, driven by a desire to make a difference.

She congratulated the QRRRWN for hosting the Strong Women’s Awards, to recognise and reward for women whose work may otherwise go unnoticed and who stand as role models and mentors for the next generation of female leaders