The Australian Council of Agricultural Journalists (ACAJ) held its Annual General Meeting on September 28, with Genevieve McAulay returned as president for a third term.

The ACAJ committee has remained virtually unchanged apart from the Victorian representative Rebecca Jennings who will shortly be embarking on maternity leave.

Peter Lewis has again stepped up as Vice President, with Laureta Wallace secretary, Gordon Collie treasurer and Leigh Radford as the International delegate.

State representatives are as follows: 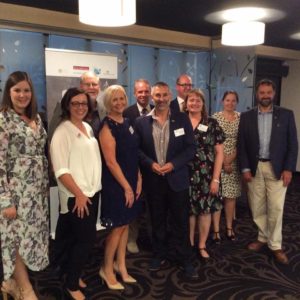 The ACAJ Committee, pictured at a networking function hosted by the ACAJ at the National Press Club in February.

It gives me great pleasure to present my second President’s report for the financial year of 2015/2016 for the Australian Council of Agricultural Journalists.

The ACAJ hit the ground running this year.

On top of running our normal national awards program the association – hosted its inaugural IFAJ pre-congress tour; held its first face to face committee meeting in Canberra which was complimented by a meet and greet cocktail party; established a working group to get a national rural media club up and running in Canberra and launched a fresh new website to build on our growing footprint and move into social media.

The ACAJ Awards continue to grow with strong entries across all State Clubs. Our winners this year:

Once again Australian journalism was a strong force on the international level at the IFAJ Congress in 2016, with Prue Adams taking out the title of ‘Best Rural Broadcast Journalist in the World’ and Matt Cawood being recognised with an ‘Excellence in Rural Writing’.

A big thank you to our awards co-ordinators this year – Vice President Peter Lewis who looked after the Broadcast Awards and secretary Laureta Wallace for her work in co-ordinating the print awards. As always we are ever grateful to our long serving photography co-ordinator, Gordon Collie.

The ACAJ pre congress tour which attracted strong sponsorship and saw us host a group of 57 delegates including 30 international journalists in Far North Qld was an outstanding success if we go by feedback from delegates, sponsors and the IFAJ.  Special thanks to the Rural Press Club Queensland for hosting a pre congress dinner in Cairns. The tour which culminated in a forum, ‘Why Australian?’, hosted by the RDC, ACAJ and NSW Farm Writers. The  key message was highlighting the diversity of Australian agriculture, the sophistication of farming practices and the Australian farmer’s ability to produce the best quality produce in the world sustainably.

This congress tour was run by a sub-committee:

In February this year the ACAJ held its first face-to-face committee meeting in Canberra, together with a meet and greet cocktail party at National Press Club.  The concept had a couple goals – to bring us closer as an organisation; to explore the opportunity of establishing a rural press club in ACT and to create an awareness about who the ACAJ is in the nation’s capital.

I think we succeeded in all three areas – it was amazing to see each state representative attend, thank you to all of you and to your club presidents for supporting this, it was also great that the club presidents from Victoria and NSW made the effort to attend along with their state delegate.  At the cocktail event we had more than 60 attendees and the ACT club is now up and running.

After the awareness exercise, thanks to the vast networks of Laureta Wallace, Pete Lewis and Leigh Radford, Pete and I returned in May with Laureta to create a working group with interested parties.  The meeting was attended by about a dozen people all keen to do their part in getting this club up and running.  Colin Bettles is the club’s interim chairman as they continue their work in creating a constitution.

The ACAJ upgraded its website with a new look and feel.  It is clean simple functional and professional.  It also provides the ACAJ with autonomy to update content for timely and up to date information.

Some of the features include news events, awards and links to state press clubs.

It is evidence of the ACAJ’s ’commitment to rural and regional Australia as we chose to support a small rural business with the website being developed by Kabosh Creative in Condamine Qld.

One of the key features is the freelance database a huge resource for Australian and international media outlets. To register freelancers must be a member of a stater rural press club and apply on line with the form approved by the ACAJ.

An important part is the events calendar and this is something we will rely on the state club reps to enter event details so the resource remains up to date.  We will also be looking for news stories form past events or anything that deemed newsworthy by the club.

I think the new website gives us a professional face to the world and is long overdue.  I want to thank our Victorian representative Rebecca Jennings who was instrumental in driving all the changes – seeking feedback and creating content and working closely with Kate.  A project of this nature needs someone to own it which Rebecca did seamlessly.  I am saddened by Rebecca’s decision to step down as the Victorian representative but am excited by the prospect that she will stay on as per her correspondence to manage the website.

In my report last year the ACAJ twitter account had about 270 followers, today I am pleased to say this now sits at 470.  Both Pete and I tweet under ACAJ and I would encourage other committee members to do the same if they are at events it just helps to build our profile.

Last year in my President’s wrap-up I said I felt like we had achieved some real milestones in 2015 and had created some real value back to our state clubs, looking back over the past 12 months I think we have surpassed even our own expectations.

I would be keen to grow on what we have achieved here and would like the new committee to consider running a breakfast or networking event in conjunction with the ACT club during ABARE.

As you will see from the treasurer’s reports our finances are down so we need now to regroup and look for ways to increase revenue.  We spent well needed funds on the new website but we also assisted flights to Canberra for state reps and committee members where applicable.  I have no regret in spending this money but now we need to top up again.

While Rabobank have paid up for this year and have sent me a contract late yesterday to continue their support of the Broadcast Award for 2017 we need to find a sponsor for the print award and if possible the photography award.

As mentioned Rebecca Jennings offer to stay on includes her interest in looking also for grant money for us as a Not for Profit organisation and I would encourage the incoming committee to explore that path as well.  I think there are a number of avenues and sponsors we could approach.  The idea might be to get a small sponsorship committee to run with this.

I would also like to recognise and thank the 2015/2106 ACAJ committee particularly – Vice President Peter Lewis, secretary Laureta Wallace, Treasurer Gordon Collie and international officer Leigh Radford for their ongoing work and for sharing the same vision to grow the ACAJ footprint . I also wish to thank and recognise our state representatives who play a vital role as the link between state clubs and the ACAJ.