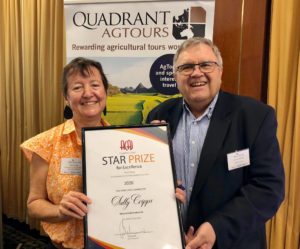 One of Australia’s premier awards for rural journalism has been won by Sally Cripps from the Queensland Country Life newspaper for her coverage of the catastrophic weather event that hit grazing communities in the state’s north-west early last year.

Judges from the Australian Council of Agricultural Journalists (ACAJ) said the Blackall-based reporter’s experience and understanding helped connect readers with the storm’s impact on beef producers, their families and their local communities – through the eyes of first-responders and those directly affected.

Sally was presented with the 2020 ACAJ – Quadrant Star Prize for Excellence in Rural Print Journalism at a Rural Press Club of Queensland event on March 5th in Brisbane.

RPC President, Stacey Wordsworth said her colleagues and friends are utterly delighted Sally’s outstanding work covering what was a truly harrowing event for rural and regional Queensland has been recognised at the national level.

“Her wisdom and ability helped to ensure this sensitive but important story was seen and heard well beyond her home state,” she said.

“Sally consistently proves herself to be one of the very best rural journalists in the business, and we’ll be barracking for her in Denmark later this year.”

As part of her prize, Sally will travel to the 2020 International Federation of Agricultural Journalists (IFAJ) Congress in Denmark in June, where her story will go up against the world’s best in the annual IFAJ Star Prize Awards.

ACAJ President Pete Lewis welcomed Quadrant’s support for the award this year, and their ongoing commitment to rural and regional journalism across Australia.

“Quadrant’s a leader in the field of inbound and outbound Ag tours and is partnering with the ACAJ to stage the next IFAJ global Congress here in Australia in September 2021,” he said.

Quadrant Ag Tours CEO Kerry Moss said it was entirely appropriate that Sally Cripps – one of the country’s most-travelled rural reporters – should take out their inaugural Star Prize for Print Journalism.

“Quadrant’s been helping people travel the world and explore agriculture for more than 30 years and we are delighted Sally Cripps has been recognised and rewarded for her outstanding work with a trip to the IFAJ Congress.”